Ljubljana  is a charming city full of artists, museums, and galleries. With a population of 300,000, it is one of the smallest capital cities in Europe. 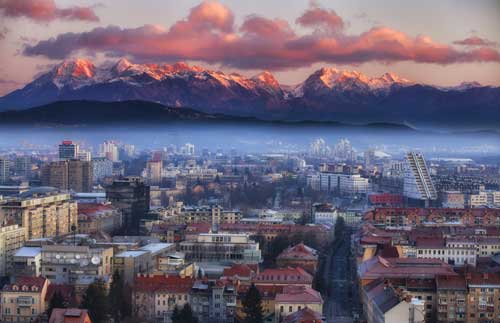 The Ljubljanica river flows through the center of town, past Baroque buildings and under the ramparts of the ancient castle on the hill. The new city and modern-day commercial core lies to the west of the river, while the old city and the castle are located on the east side of the river. Many bridges cross the river, the most famous of which is Tromostovje (Triple Bridge), designed by architect Jože Plečnik. 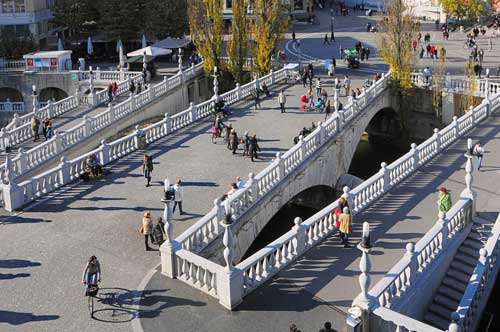 • By foot
The center of Ljubljana is small enough to cover by foot. You can pick up a free city map at a tourist information center or in the train station. Navigating or finding a street is easy as streets are clearly marked.

• By bicycle
Bikes are available for rent at the Slovenian Tourist Information Center (beside the Central Market) as well as some of the hotels in the area (€1 for 2 hours, €5 for the whole day ending 7~9pm depending on season). There is also a system called "Bicikelj" where you can rent bikes for a week just for 1€. It has 300 bikes on 30 stations around the inner city part and you can subscribe with a credit card online. For more information go to this site: http://en.bicikelj.si/

• By city bus
The city's transportation authority LPP operates 26 bus lines, which are clean and run frequently (every 5-10 minutes, 15-30 minutes during the weekend and summer). Most bus routes operate 5am - 10.30pm (Sundays from 6am).
To ride the buses, you must first purchase an Urbana card (similar to an Oyster Card in London). These can be bought at self-service stations ("Urbanomat") found at the larger bus stops across the city, LPP sales sites, Tourist Information Centers and newspaper agents for €2 and need to be loaded with an amount ranging from €1 to €50. Upon entering the bus by the front door, you need to position the card next to the reader to pay for the route. The confirmation is a quiet beep and an illuminated green light, while a negative response is a louder beep and a red light. After that, you proceed to take your seat / stand.
The cost per journey is €1.20 and includes an unlimited number of free transfers within 90 minutes from the first entry to the bus.
Most lines operate at least once every 15 minutes. Timetables (in Slovene) only have departure times from first bus stop so you can use the webpage to obtain predicted departure times for next three buses from every bus stop.

• By taxi
Taxi Ljubljana"http://www.taxi.jezakon.si/"Taxi Laguna (tel. 080 11 17), Taxi Metro (tel. 080 11 90) and Intertours Taxi (tel: 031 311 311) are considered the cheapest taxi companies. These are free numbers (all numbers starting with 080 are free in Slovenia), so you can use a phone booth to make a free call. Note that not all taxis charge the same fare.
While taxis ordered by phone are cheap, those waiting on the street will usually charge through the roof, and you can end up paying €25 for a short ride! Unless you're in a hurry, always order a taxi by phone!

• Ljubljana Free Tour (Ljubljana Free Tour), Preseren Square. Ljubljana's Free Tour is probably the most popular walking tour in town. All tours start on the steps of the pink church in Preseren Square - the city's main square. In Summer there are two tours a day, at 11:00 am and 15:00 pm, while for other seasons you need to check online or get the latest fliers in hostels and hotels. No booking required so simply show up with a smile and you're in. the tour is just over 2 hours long and takes you through the old town and city center. Ljubljana is a lovely mid-size town, very baroque and of course... teeming with Jože Plečnik's amazing architecture, probably the one architect who had the most influence on a single city anywhere.

The easiest and most pleasant way to reach all spots described below is by foot.

• Triple Bridge (Tromostovje). Designed by Jože Plečnik. Tromostovje consists of three separate picturesque bridges located next to one another. The neighboring Prešeren square with the statue of Slovenian greatest poet France Prešeren is the central location of downtown Ljubljana and a common meeting point. From here, cross Ljubljanica and turn left for Open Market and the Dragon Bridge, or go straight and then right for the old town.

• Old Town. Squeezed between the castle hill and Ljubljanica river is the old town with two squares, Mestni trg (City square) with the Robba fountain and the city hall behind it, and, further on, Gornji trg (Upper square). Well preserved medieval buildings now house local designer shops, and several popular cafes and restaurants. Although they may look creepy, the perfectly safe narrow lanes lead to charming little squares and buildings. 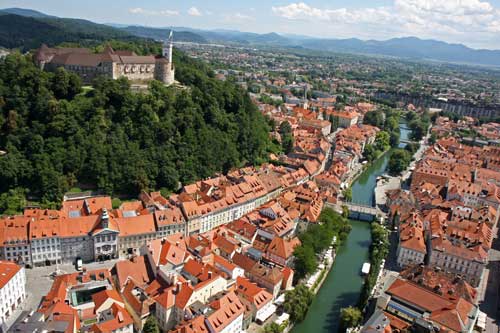 • Zmajski Most (Dragon Bridge). Completed in 1901, designed by Croatian Jurij Zainovič. It is guarded by four detailed dragon statues from the city's coat-of-arms. Look out for the dragon motif throughout the city. Be careful around the Dragon Bridge area, as it is on a major busy road just outside the pedestrian zone and near misses (and worse) between inattentive tourists and traffic are common. The dragon bridge is located at the end of the Ljubljana Open Market, just a block or two down the river (north-east direction) from the Triple Bridge.

• Ljubljana Castle. The tower has magnificent views all over the city. You can also see the Sava River and Kamnik Alps in the distance. Included is a 3D Movie of the history of Ljubljana from a pre-historic settlement to Roman Empire to modern times (€5 for adults, €3.5 for students, seniors). Entrance to the Castle Courtyard, Chapel and Gift shop is free, but there is a charge for access to the tower. 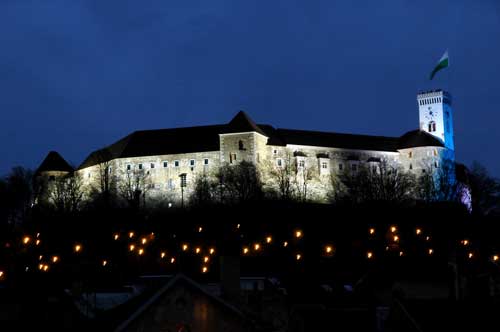 • Square of the Republic. Where crowds gathered as Slovenia announced its independence from the Yugoslav Federation in 1991. The square has significant importance for Slovene history, as it was a place of important public gatherings (and demonstrations) in the past. Across the road is the Slovene Parliament. Its facade is decorated with artistic nude statues of Slovenes at work and leisure. The square also houses the International Business Centre.

• Roman Ruins. A short walk west of the centre of town are the remains of the Roman City Walls, including a number of pillars from an entrance gate.

• Krakovo. A village-like part of the city connecting the centre to the Trnovo suburb.

• Metelkova City. A self-declared autonomous culture place to gather for alternative artists, many subcultures and youth. What used to be a military barracks is now full of underground artists, bars and nightclubs. Metelkova can get crowded on Fridays and Saturdays. It is within 5 minute of walk from main Train Station, and it is home to a renowed hostel Celica. 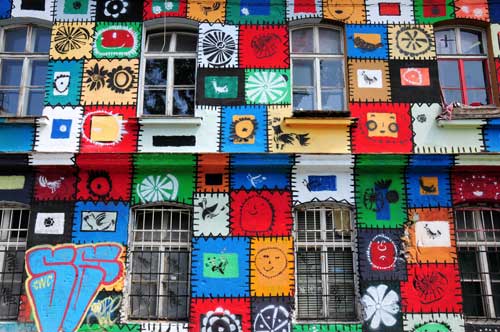 • Tivoli Park, (At the western end of the city centre). The main city park. You can sit down on a park bench and enjoy the sun. Rožnik (the hill overlooking Ljubljana from the west) is a short hike away through the woods. This is a popular weekend destination for the locals. 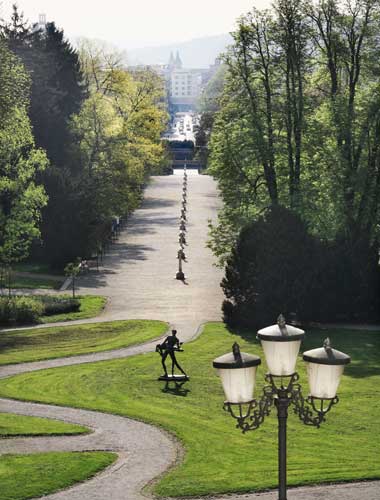